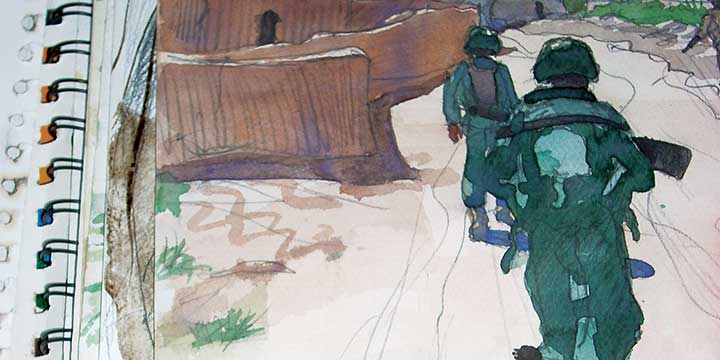 Sketch from Mumford’s field notebook “Drawing while walking to distract myself from IEDs,” Afghanistan, 2010.   Photo by C. Parrish

Steve Mumford went into combat armed with a sketchpad

Steve Mumford hunkered down on the Baghdad rooftop with a U.S. military sniper who was patiently and slowly scanning the street and buildings opposite. The sniper had taken his helmet off, even though it was dangerous, because it blocked his view. Mumford, a few yards away, kept his head down and sketched for his life.

Starting with the Civil War, when Winslow Homer sent back field sketches of the front to Harper’s Magazine, artists have captured military combat with brush and pen. Official combat artists have been sent to war by the U.S. Marine Corps with orders to “Do art” since World War II. During WW II there were 70 soldier-artists. Currently,  there is only one full-time military artist serving in the front lines as a combat-ready Marine.

And then there is independent combat artist Steve Mumford.

In 2003, after the Iraq invasion was over, Mumford, an established New York painter  whose summer art studio is on the St. George peninsula, applied to be embedded with the American military. The slots for embedment had already been filled by reporters and photojournalists, so Mumford bought a ticket to Kuwait City and hopped a ride across the border and into Baghdad with French reporters headed that way.

In May 2003 Baghdad was in a bit of a lull. It wasn’t until 2004 that the insurgency solidified and it became unsafe for Westerners to be on the streets at all.

Mumford approached the army with his sketchbook in hand and asked to be embedded on a patrol-by-patrol basis. He found sympathetic commanders and made four trips to Iraq by the end of 2004, spending several months at a time in the country, sketching on the street, in teahouses, and on short embeds with the military. In 2003, it was easy to rent a room in the city and operate independently. In 2004, after American contractor Nick Berg was kidnapped and beheaded in Baghdad by al-Zarqawi Jihadists, that was no longer true and Mumford spent more time on embeds.

For Mumford, who describes himself as a thematic artist who gets deeply involved in one subject area for a long time, politics and art go together but not as a form of demagoguery. It is not Mumford’s intent to convince others of a particular viewpoint for or against the current wars being fought  in the Middle East, or to glorify conflict or American military power.

Mumford sketched in the inside of Hum-Vees, while soldiers interviewed the wife of a man suspected of insurgent activities, in tea shops, squatting in the sand. He sketched  while walking with a patrol to keep his mind off roadside bombs. Back in his room, he turned the sketches into watercolors and ink washes. Later, sometimes much later, he decided which to turn into a more permanent work of art.

“It’s a process to decide what to paint,” said Mumford. “A scene will stay with me when I am doing nothing. What I am searching for are metaphors, for timelessness, not just this war, but wars in general. I am searching for a scene that speaks to a larger theme of war and that poses the question: should the U.S. be in foreign wars?”

Such is the case of the wall-sized canvas Mumford was hurrying to finish last week at his St. George studio for Art Basel Miami Beach, the international art fair of modern and contemporary art to be held the first week in December.

The scene is that of blindfolded prisoners in jumpsuits being loaded up a ramp into a C-17 transport plane.

“I was in Mosul for a month in 2008, embedded with different U.S. units,” said Mumford, standing back and looking at the almost completed canvas.

“There was a prisoner transfer at midnight. Buses pulled up and groups of prisoners in different colored jumpsuits were shackled together waiting to be loaded on the C-17.”

“To me it brought up these questions of why we fight wars. To remain powerful? With all the technology and power of the U.S. military here, it felt like ancient Rome when I saw this scene of barefoot and shackled prisoners. It brought up the feelings of empire.”

Mumford ink-washed the field sketches in his sketchbook. When he decided to do a large canvas, he re-created the scene in a photo shoot set up on a New York roof and advertised for Arab-looking male models on Craigslist to portray the prisoners. He enlisted some of his friends to play different roles.

“People fall into roles when they are geared up in photo shoots,” said Mumford. “It’s odd. But, yes, it did bring up a lot of discussion during the scenes.”

That was particularly true of the expressions on the faces of those acting the part of American soldiers. Mumford had the real scene in his mind and in his ink washes; he was looking for emotional content  and context as well as realism.

Photographs of the acted scene serve as specific guides for Mumford as he paints. He tacks up one at a time and works closely to depict the folds of a jumpsuit or the uncertain look on the face of an armed soldier, who is fully aware of her power and not wholly comfortable wielding it.

“I’m not doing antiwar art. I recognize war as complicated,” said Mumford. “This is not simple. This is not Vietnam redux. I’d like people to understand the contradictions. I want the audience to feel what it’s like to be there. My goal is to make it realistic, the faces and expressions are emotional clues.

“The key point here is that this is a powerfully moving scene. Not because the prisoners are necessarily innocent or shouldn’t be prisoners, but here we are. What more dramatic way to condense the whole war? What do we do with them? How do we try them? How can we reform them? Or is this just a war that goes on and on and on?”

Mumford said going to war has changed how he approached art. The close quarters of military combat that makes soldiers comrades in arms didn’t exempt him.

“I was directly engaging with people while making art and that level of empathy hadn’t been there before,” he said. In his previous work, he had been at a remove from his subjects.

“Then, I had scenes that were composed in my head and people were at a distance,” Mumford said.

Combat art was immediate and fast.

“Soldiers and Iraqis were hard enough to record, even in a pedestrian scene,” he said. “Even when it looks calm, stakes are high and everyone knows it. I felt privileged to be part of it, with no sense of ego imposed on it.” 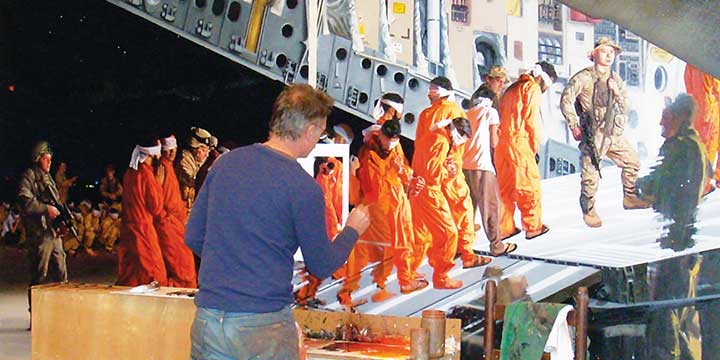